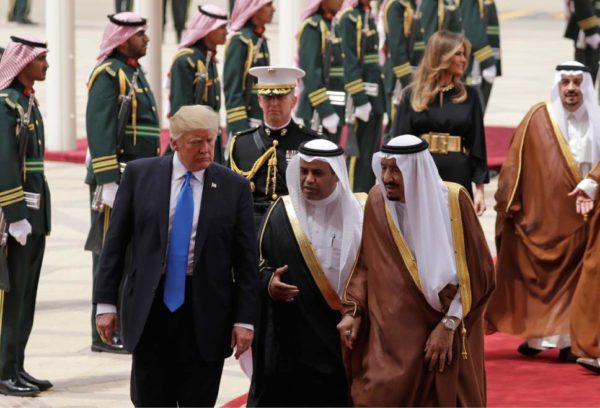 In an ostentatious conference hall in Riyadh, President Trump lectured a group  of bizarrely deferential leaders from 50 Muslim majority  nations, while actually telling them he was “not here to lecture”.  Magically changing the campaign rhetoric of  “I think Islam hates us.” and hence his subsequent demand for a “total and complete shutdown” of Muslim immigration, he audaciously declared Islam as  “one of the world’s great faiths.”  He refrained from even using  his favorite  term “radical Islamic terrorism.” A term for which he chided his predecessor, President Obama, when he  refused to use it.

His expectant audience may well have waited in vain for a word of apology for his racist, anti-Muslim speeches of last year. But when none came, not one of them had the spine to stand up to him for his bigotry.  Instead they applauded when he condemned Iran –  rather than ISIS – for “fueling sectarian violence” while totally ignoring the fact that it is the Salafi Wahabi sect in Saudi Arabia, which is the root cause of Wahhabi Radical Terrorism.  He blustered that “We are adopting a principled realism, rooted in common values and shared interests,”. Interests may be, of – “a lot of beautiful military equipment” – (for an even more beautiful $110bn).  But What values do the we Americans share with the dictatorial Saudis?

What does the Land of the Free and the Home of the Brave have in common with the Land of repressive Royals and Home of Misogynistic Men?  Saudi Arabia does not allow public worship by believers of religions except Islam, and discriminates with impunity against Muslim religious minorities, notably the Shia and Ismailis. These minorities are disparaged by the Saudi  Government and are victimized in in public education, the justice system, and employment.

Yet when he went on to declare Islam “one of the world’s great faiths.”, some of our myopic media hailed this as a “reset”. There can be no reset until President Trump acknowledges the valuable contribution of Muslims in his own back yard.  Apart for scant negative references to San Bernardino and Orlando, our President totally ignored American Muslims in his ‘lecture’ that was not supposed to be a lecture.

This omission reveals the paucity of President Trumps understanding of Islam and Muslims. It seems that in his world-view Muslims only live in his imaginary “Muslim World” For this administration, as long as, Islam remains in the so called “Muslim World” rather than a faith which is very much part of the fabric of American society it cannot be a ‘reset’.  Ironically, President Trump discovered, of all the places, in the gilded halls of the Saudi palaces, that Islam is a great faith. So now he should cast his eyes into the humble homes of the millions of American Muslim doctors, engineers, nurses, social workers, teachers, industrialists, tech geniuses, bus drivers, farm workers and pilots, who are an integral part of America and he must publicly recognize the contributions American Muslims have made for generations. The “reset” can only come if this administration categorically condemns Islamophobia, withdraws the Muslim ban, stops ethnic and religious profiling at our airports and above all stops viewing American Muslims through the prism of Islam as a foreign ideology, which is good only outside our border.

Regardless of whether the Trump Administration does, as patriotic Americans members, we will continue to fight violent extremism, as much as we  did before Mr. Trump and will continue to do so after Mr. Trump. The Shia Muslim Council and its members will remain committed to play their part in serving our  great nation along with all the patriotic citizens of the United States of America.
Jazakum Allahu Khayran,
Shia Muslim Council of Southern California