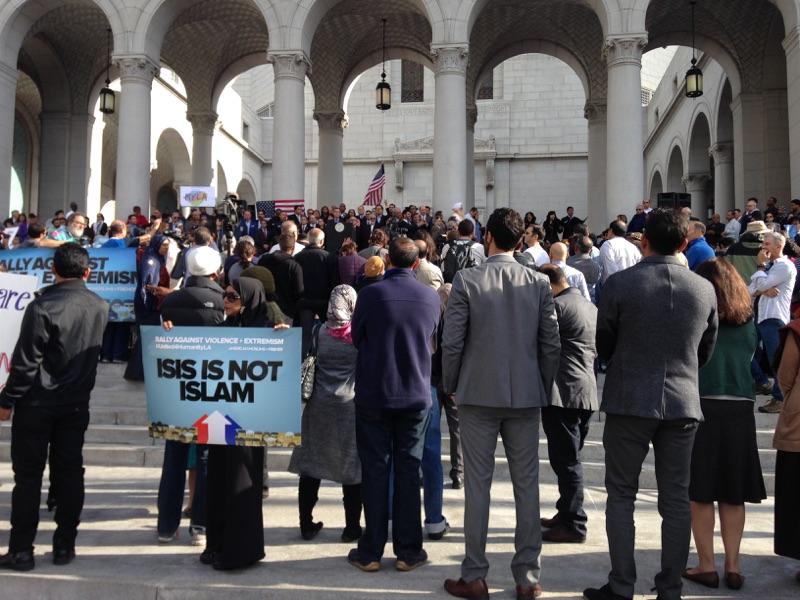 Los Angeles Mayor Eric Garcetti, joined by San Bernardino Mayor, Carey Davis, and other Civic leaders, including Police Chief Charlie Beck and faith leaders, eloquently spoke about how our community must not be divided by hate, but needs to come together in the wake of the tragedies in San Bernardino, Paris, Lebanon and elsewhere.

Mayor Eric Garcetti lamented that sadly there have been 21 attacks on Muslims and mosques since the San Bernardino tragedy.

Addressing a crowd of over a thousand men, women, and children from every faith, culture and ethnicity, Imam Sayed Moustafa Qazwini, President of the Shia Muslim Council, Dr Muzammil Siddiqi, Chairman of the Islamic Shura Council, and Salaam Marayati, President of the Muslim Public Affairs Council, unequivocally condemned the terrorism by ISIS and all those who used the name of Islam to perpetrate an ideology of hate and violence.

Imam Qazwini emphasized  “that Muslims have an added responsibility to ensure that the great faith was correctly understood as a faith of peace and humanity.” Quoting President Obama he stated that “ISIS is “a cult of death,” and “Muslims are the biggest victims.”

Today when many Muslim Americans feel aggrieved that they seem to be collectively held responsible for the actions of a few, the rally was a comforting and inspiring experience as they hugged each other and held hands with their fellow citizens from all over the LA area who had come to reject the rancid rhetoric promoted by the media which gives so much airtime to help spew toxic waste under the pretext of a Presidential campaign.

It is hoped that rallies of this nature will redress this imbalance, enhance understanding and help galvanize our Community in Los Angeles and elsewhere to work collectively to fight this evil of our times perpetrated by ISIS and other extremist ideologies.