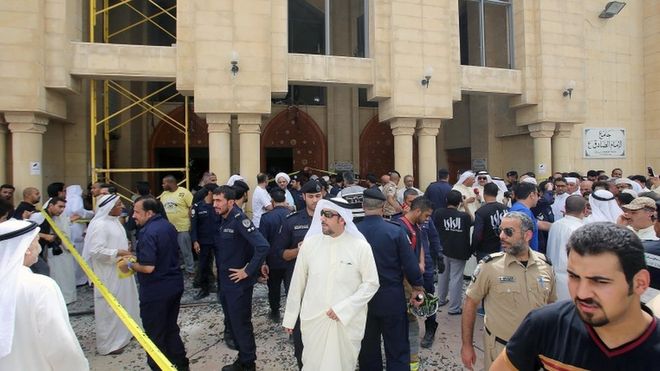 The Shia Muslim Council of Southern California strongly condemns the latest attack on Shia worshippers at the Imam al-Sadiq Mosque in Kuwait City, Kuwait. The attack occurred on Friday, June 26, 2015, while worshippers had gathered to perform the Friday Prayers, and resulted in a large number of casualties and injuries.
This cowardly attack is the latest in a string of brutal attacks on innocent Shia worshippers. Just last month, two suicide bombings targeting Shia worshippers attending Friday Prayers in Qatif and Dammam, Saudi Arabia, resulted in the death of a number of worshippers and many injuries.
These horrendous attacks are a direct result of the takfiri ideology and rhetoric that is constantly spewed by anti-Shia groups, which are heavily supported by a number of Gulf states and governments. What we are witnessing now is an outright genocide of Shia in various parts of the world.
The Shia Muslim Council of Southern California calls upon the governments of the Gulf states to condemn these vicious attacks, and to once and for all put an end to the ideological and financial backing of sectarian and takfiri groups. These governments have a duty to protect all of their citizens from such terror, regardless of their religion or school of thought. We call upon these governments to immediately ensure the safety of their citizens, especially the Shia.
We call upon the government of the United States of America to take a firm stand against these and similar anti-Shia terrorist attacks, which continue to be supported by some of our nation’s Middle Eastern and Gulf allies. No longer can we remain silent in the face of this injustice. We ask our government to demand that its Gulf and Middle Eastern allies do everything in their power to ensure the safety of their citizens.
We urge the American Muslim community and its representative organizations to contact the White House and State Department to express their condemnation of these attacks, and to call for urgent and swift action to counter the rise in sectarian terrorism.
The Shia Muslim Council extends its condolences to the victims of these horrendous attacks. We pray to the Most Merciful Lord to bless the souls of the innocent martyrs, to bestow a full and speedy recovery to the injured, and extend patience to the victims’ families and loved ones.
The Shia Muslim Council of Southern California is an umbrella organization of 15 Shia Islamic centers in the southern California area. It was established on September 17, 2014. The current elected board members of the Shia Muslim Council are:
President: Imam Sayed Moustafa al-Qazwini
Vice-President: Dr. Hasnain Walji
Secretary: Hajj Khalil Dewji
Treasurer: Hajj MehdiReza Hirji
Councilor: Dr. Ridha al-Hajjar
Councilor: Hajjah Fatma Saleh
Councilor: Sayed Asghar Rizvi