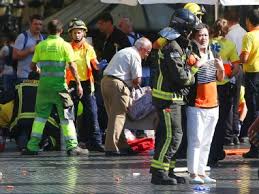 The Shia Muslim Council of Southern California unequivocally condemns the atrocities committed against innocent people in Barcelona yesterday killing 14 people and maimimg over a hundred.

Terrorism is a curse of our times that distresses the hearts of all upstanding human beings who inhabit our world. The cruelty of these assassins, has yet again, brought terror and trepidation to all, world over.The Barcelona attack appears to be yet another manifestation of the intolerant and bigoted  ideology of  considering one self superior than another. Some use their misguided notion of their  religion while others use their skin color to justify killing and maiming of innocent human beings.

When human civilization adopts praiseworthy traits in their conduct such as truthfulness, honesty, consciousness, benevolence, and sense of justice it benefits all. Similarly, humans descend to their worst when greed, injustice, self-interest, and intolerance become the misguiding principles.

What is needed today is the reassertion of the values of compassion and justice, This reassertion, beyond all human biases and divisions, emphasizes th­­­­­at unity and safety of mankind is the very heart of the Islamic message as much as all other great faiths.