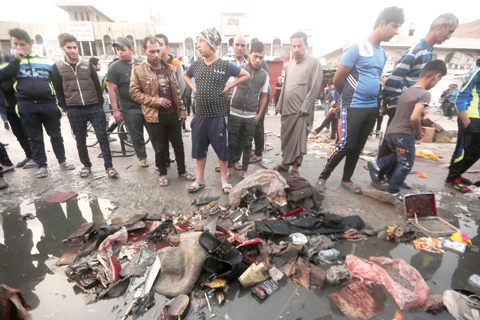 Condemnation of the Callous Act of Terrorism in Baghdad

We are grieved and deeply saddened by the killing of  innocent men women and children in Baghdad on early hours of Sunday .  In  the deadliest attack so far this year, a  refrigerator truck packed with explosives blew up in the central district of Karrada, killing more than 120 people and injuring at least 200.  Karrada was busy at the time as  believers eat and shop late during the evenings in  holy month of Ramadan.

At least 11 other deadly attacks have taken place in Iraq this year, with ISIS  claiming responsibility. (See Below for list of atrocities  since January)

With each atrocity perpetrated with uncanny regulatory, The Shia Muslim Council’s stand has been unswerving:  these barbaric acts of ISIS have no sanction whatsoever  in the religion of Islam, which absolutely forbids murdering  innocent people. Using God’s name to justify this abominable  path of destruction and taking of human lives  is a  desecration of the universal principles of compassion and justice upheld by all faiths.

Such  inhuman acts of those who ceaselessly continue to perpetrate these atrocities is beyond comprehension or words of consolation. All of humanity can not but be pained by the loss of these  innocent lives and the sufferings of the injured. As we watch the increasing death toll, we continue mourn for each  victim and weep with bereaved families. The Shia Muslim Council of Southern California unequivocally condemns all the  such callous acts of violence.  We offer our heartfelt condolences to the families and loved ones of the victims.

The barbaric savagery of these  extremists has brought terror the world over.  These evil men are known as “Takfiris” and their deviant acts are a symptom of the Wahabi  ideology, that has its genesis in Saudi Arabia. It began many decades ago with  with explicit  sanctioning of killing of  Shia Muslims, deemed, by some misguided scholars, to have deviated from Islam. Today this Wahabi  inspired menace has engulfed  entire humanity, as these demented devils and their surrogates kill and maim people all over Iraq and Syria and other places such as  Paris, Brussels, San Bernardino, Orlando ,Istanbul, Lebanon , Yemen and Dhaka  to name but a  few places, which have suffered these cruel and callus atrocities.

We call upon the authorities in Iraq and elsewhere in the World, to bring the perpetrators to justice. We call upon our US authorities, who bear a special responsibility in case of Iraq, to leave no stone unturned in defeating this  menace of terrorism. In solidarity with people of all faiths, we are all dutybound  to stand up to  this satanic cause  with any and all means at our disposal . At the same time we must endure these calamities  with faith and hope and hold steadfast in the belief of the power of God’s love for all humanity.

June 9: Two  suicide bomb attacks near the entrance of a military base in Taji, north of Baghdad,  kill at least 18 people.

June 7: A suicide bomb by ISIS in the holy city of Karbala claims the lives of 15 people

May 17: A series of attacks including suicide bombings claimed the lives of  least 48 people including  Sadr City, a Shiite district in northern Baghdad.

May 12: At least 16 people are killed when gunmen attack a cafe with gunfire and grenades  in the town of Bald.

May 11:  three car bombs in Baghdad, including a huge blast at a market in a Shiite area, that kill at least 94 people

Another bomb hits Sadr City, killing at least 64 people. Another suicide car bomb attack kills at least 17 people at the entrance to the northwestern neighbourhood of Kadhimiyya.  In the Jamiyah district of western Baghdad, another car bomb kills at least 13 people.

May 1: Attack on  mainly Shiite southern Iraq, killing at least 33 people with twin suicide car bomb blasts in the city of Samaraa.

March 25: A suicide bomber blows himself up during a trophy ceremony after a local football tournament near Iskandiriyah, killing at least 32 people, many of them teenagers and children.

March 6: At least 61 people are killed when a massive truck bomb explodes at a crowded checkpoint at one of the entrances to the city of Hilla.

February 28: Bombings  kill at least 33 people near a market in the Sadr City area.

January 11: In two attacks  gunmen and bombers kill at least 12 people in a busy market area of Baghdad, while a double blast at a cafe claims another 20 lives.

Suicide blasts, gunfights and hostage-taking kill at least 12 people in Baghdad Jadida. And dual bombings kill at least 20 people at the cafe in the town of Muqdadiyah, northeast of Baghdad.